Transition Shipston are helping to organise a 2 day Introduction to Permaculture Course at Holycombe near Whichford… a perfect venue for such a course. 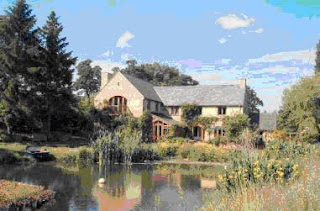 St Edmunds Church, (opposite the fish & chip shop in Shipston) has invited Transition Shipston and the Surrounding Communities to a Candle Light Vigil at 5pm, for half an hour, on Sunday (13th December).
For more information contact Helen Winnifrith 01608 661244, helenwin@tiscali.co.uk

"Transport Revolutions" is an episode of The Sustainable Region (Vancouver, BC) featuring interviews with Anthony Perl (Simon Fraser University) and Bryn Davidson of the Dynamic Cities. See the Post Carbon Institute website:  http://www.postcarbon.org/issue/12879-transportation (recommended by Pat Harris)
Posted by TransitionShipston No comments:

Visit to Vale Landscape Heritage Trust at Cleeve Prior

Beekeeping in the Community

You will probably be aware that the UK honey bee population is in decline.

On Saturday 5 December, ahead of the UN climate change conference in Copenhagen, tens of thousands of people from all walks of life will flow through the streets of London to demonstrate their support for a safe climate future for all. If you would like to join them, a coach will be leaving from central Stratford at 8.00am on 5 December, calling at Shipston-on-Stour before proceeding to London. The coach will return via Shipston, arriving at Stratford at approximately 7.00pm. The cost will be £10 per person (children under five free). Contact: Jo Taylor 01608 685454
Posted by TransitionShipston No comments:

We are holding a Packaging Event on Saturday November 14th from 10-2 outside the Shipston Co-op. There will be a display of unnecessary packaging and information about how we can act to reduce the pile of packaging that surrounds our shopping. The Co-op is involved because of its good record for working to improve its environmental record, and is also giving away 50 Fairtrade cotton shopping bags. Shoppers will be invited to leave their excess packaging and Transition Town volunteers will take as much as possible for recycling.

Fruit harvesting and juicing at Shipston High School
We had a successful apple and pear picking trip to Portabello last Tuesday (13th october), thanks to Keith, and with the help of PC Guy Blacklock we were able to take the fruit picked to Shipston High School this afternoon. There is a blossoming Food Science after-school group there run by the Mrs Butterworth, Food Science teacher.

For those that missed the Transition Shipston Food Open Space meeting there was great enthusiasm and ideas/suggestions. The ideas are being discussed further at the meeting on Monday when hopefully we can start some more food initiatives. Notes from the Open Space:

The Big Green Idea (www.thebiggreenidea.org) is an environmental charity headed by Brigit Strawbridge that seeks to encourage people to move to a more sustainable living.

Keith & Sue Finlay have 20 lambs that are just being sent to the butcher. If anyone want to buy one (or any part of one) contact Sue Finlay: 01608 661157 or sue.finlay12@btinternet.com
Posted by TransitionShipston No comments:

PC Guy Blacklock the Safer Schools Officer at Shipston High School has sent in this email requesting help with food growing projects at the school...
In a few weeks time I will be running the Duke of Edinburgh award scheme from Shipston Youth club, if there are any projects already running, can I ask if anyone would be willing to take on some young people so they can complete a section of their award? The relevant sections are either volunteer or skills. So they could volunteer to help with a specific project, or learn gardening skills over a set time period.

There were 20 people at the first Transition Shipston Open Space entitled "Feeding Shipston and the Surrounding Villages in 2030" on Tuesday 8th September.

At the beginning of the meeting several local people who had already started producing food locally told of their experiences.

* Frances Lee (see photo) from Witchford showed slides of the allotment she and others had started in the village earlier this year when they managed to get a local landowner to provide a hectare of land for a peppercorn rent. There are now 12 allotment holders who have all produced good crops in their first year.

Got ideas? Got inspiration? Want to get involved ? Join us for a series of Open Space sessions 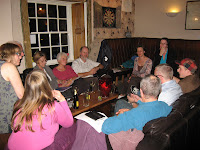 Transition Shipston will be facilitating a number of Open Space events to allow people to share there ideas for how we can tackle the threat of Peak Oil and Climate Chaos.

Open space events are designed to allow people and communities to share ideas there ideas on how a particular problem can be tackled, from these ideas practical projects and solutions can be established.

So if you've got some good ideas? Would like to get involved? or just would like to see whats going on, please come along.

The open space sessions will be on the following 3 topics: Food, Energy and Transport. These topics were popular areas concern and interest at the Age of Stupid film screening.

The dates for the Open Space sessions are as follows:

Please look out for further info on the events.

We look forward to seeing you there

Join us for the Shipston-on-Stour premier of:

The Age of Stupid

“Anything but a good-guys-versus-bad-guys polemic. It is angry but nuanced, despairing but strangely motivating”… New Statesman

Transition Shipston is looking for land or unused gardens that can be used for community food growing and sharing. If you have land or know of suitable land contact:

The first public meeting of Transition Shipston and the Surrounding Area was addressed last month by guest speaker James Pavitt a founding member of National Association of Farmers’ markets. James talked about how the predicted increase in the price of oil and climate change will effect food production and the local economy. He said that in three short years the idea of Transition Towns has spread to over 150 communities including , Leamington and even cities such as .

The meeting which was attended by around 30 people then discussed how we can make the town and surrounding villages more self-reliant so that the community can become more resilient in the face of future food and energy “shocks”.

There were many interesting areas discussed:

One suggestion was to start a Community Supported Agriculture (CSAs) scheme similar to the Canalside CSA near where a local farmer has rented out 7 acres of his land to members of the local community who all take part in the growing and share the produce. Other ideas included turning unused open space into community gardens / orchards… and a School Farm.


Re-invigorating the local economy is a primary aim of Transition Towns. Places such as Totnes in Devon and Lewes in have issues the own local currencies to keep more money circulating locally and encourage local shops. The idea of a local “loyalty card” to be issued by shops also raised some interest. Some people thought that greater publicity should be given to the positives of local shopping such as more local employment & opportunities. It was suggested that local shops could become the “Town Supermarket” if it was made easier to walk between shops as it is no further to walk around Shipston shopping area than a supermarket.

Energy & Transport could be a major issue in Shipston and the villages around if predicted oil shortages occur in the coming years. The meeting discussed ways of reducing energy consumption by encouraging more “ecological building” and it was suggested that local energy advisers are needed. Bulk shopping orders could be made by people living in the villages to cut down on travel. It was suggested that the Mill could be re-opened as a mill and more use could be made of the river. Schools are able to get grants for sustainable energy such as solar panels and wind generators to cut down on their fuel bills.