At the Climate Challenge on Saturday at St Edmund’s Church in Shipston the Shipston High School Eco Team was given a special commendation by Shipston Mayor Fay Ivens after they came second in the competition. The challenge which was to design their “ideal eco house” in just one hour was part of National Climate Week in which over 3000 organisations take part. The High School team with pupils from year 7, 8 & 9 were competing against adult teams from Shipston and nearby villages. 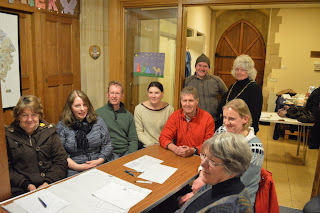 The challenge was judged by the Mayor with the help of Town Councillor, Ian Cooper. After one hour the teams presented the ideas for their eco houses with the help of diagrams. In addition to solar panels, recycling and electric cars, the teams included wool insulation, wind turbines and wood pellet boilers. The winning team from Shipston, impressed the judges with their integrated sprung floors and special water downpipes to collect energy for electricity. Their design will be forwarded to the National Climate Challenge.
The judges said it was difficult to pick a winner as every team had come up with unique and real plans for future sustainable living. The Mayor had a special commendation for the Shipston High School Team who came second in the overall competition. Their team was made up from the school eco club and gardening club with the support of their teacher, Farah Ahmed.
David Passingham from the organisers Transition Shipston said ’ every team was very creative but we were particularly impressed by the knowledge and understanding shown by the young students from Shipston High School‘.
As well as the challenge there was a swap shop stall of bric-a-brac donations and a lot of lively conversation. The event was an educational and fun afternoon.