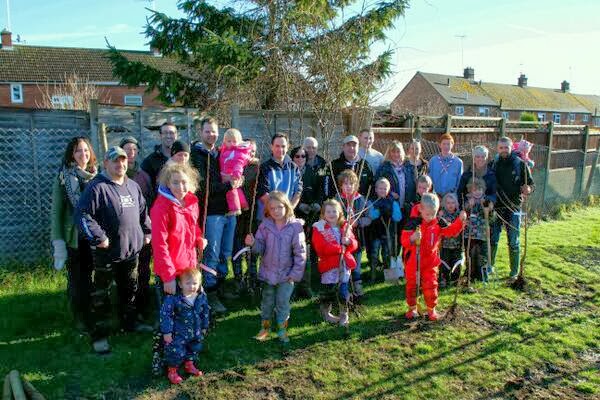 Following a two-fundraising campaign led by Polly Taylor , there is now a climbing frame, swings, five-a-side football pitch and a basketball hoop, along with a slide and benches at the Queen's Avenue Play Area. Transition Shipston has been raising money for 3 years to plant a community orchard to surround the play area. On Sunday 19th January pear, cherry, plum and apple trees planted with the help of Shipston Cubs. 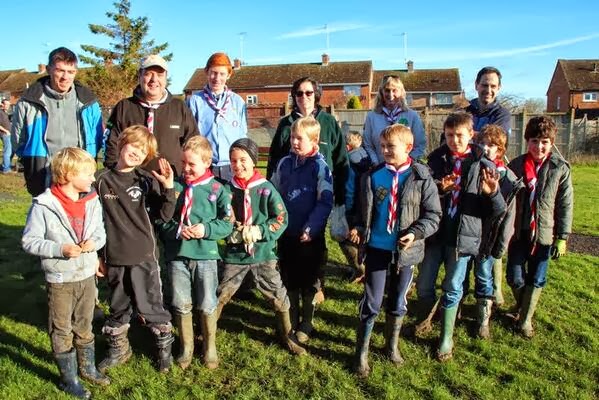 Each cub will have his name put on the tree that he planted. The activity will be counted towards their cub badges. Herbs plus blackberry and raspberry bushes will be planted by another work party in a few weeks' time.
Mike Ashton, Chair of Transition Shipston, said: "I'm delighted that the site is now starting to come together. A year ago we started work with the first plantings and now much of the play equipment is in and the landscaping's going well."
Phase two of the project which will include a zip line and more toddler equipment should be completed by late summer.

No-dig With A Difference
Permaculture enthusiasts from Transition Shipston and Hook Norton have been making no-dig raised beds with a difference. The new method called “Hugelkultur” is being tried out at Jenny Lanham's allotment in Long Compton. Instead of putting organic waste in the bin on the kerbside for the bin men it was saved to build the Hugelkultur. Logs, branches, leaves, grass clippings, straw, cardboard, petroleum-free newspaper, manure and compost were built into a mound and topped with soil. Herbs and veg will be planted on the top and sides in the spring..
Hugelkultur has many advantages over a standard veg plot. It holds moisture, builds fertility, maximises the surface volume and are a great space for growing fruit, vegetables and herbs. For more information about Hugelkultur see: http://www.permaculture.co.uk/articles/many-benefits-hugelkultur?utm_source=GraphicMail&utm_medium=email&utm_term=NewsletterLink&utm_campaign=newsletter-3978-Oct-2013&utm_content=
A work party to finish off the Hugelkultur will be held on Sunday 2nd Feb. The next pub meeting of the group will be at 8.00 Monday 24th February at the Red Lion Long Compton
We are looking for projects to work on as a collaborative learning experience, seed sharing etc? If you have any ideas please email Jenny Lanham – photojourno2003@yahoo.co.uk or join the 3 Counties permaculture group http://groups.yahoo.com/neo/groups/3CP/info

Ilmington Solar School
The fund for the solar panels now stands at nearly £3000, thanks to the people sponsoring solar tiles on the website, a sponsored cycle and a sponsored swim. The target is £17000 so more fund raising events are planned. Donations welcome to:
www.solarschools.org.uk/ilmington  e (charity number: 1028139). Donations of £100 or more will allow a company to place a logo and website link on our fundraising site. Supporters can also follow our fundraising story on twitter (twitter.com/ilmingtonsolar) and facebook (www.facebook.com/ilmingtonsolar).

Great British Elm Experiment
Stretton village biodiversity group has just planted an elm tree sapling as part of the “Great British Elm Experiment”. The experiment is being run by the Conservation Trust and involves planting elm saplings which have been grown from cuttings taken from mature trees that appear to have resisted Dutch elm disease for over 60 years and that have been skilfully micro propagated. The resulting saplings are being distributed to hundreds of schools, community groups, local authorities and private landowners who have signed up to take part in The Great British Elm Experiment.
Saplings are free to schools and non-profit organisations, whilst private individuals and businesses can purchase a special sapling at a modest cost. Find out details on receiving a sapling here.
Each small tree is accompanied by a certificate showing its parent tree and variety. Schools will also receive a poster with growing tips and project ideas.
For more information see http://www.conservationfoundation.co.uk/project_info.php?id=2

Small Wind Turbines For Shipston?
Warwickshire Community Energy (CEW) is hoping to bid to the Rural Community Energy Fund for funding to carry out a feasibility study to find suitable sites for small wind turbines in the Shipston Area. They are hoping to find a site that could accommodate two or more 10kW wind turbines, each of which could potentially generate 30 - 35MWh of electricity a year. CEW is hoping to get the support of Shipston Town Council for their bid.
Community Energy Warwickshire is a new approach to local energy – a co-op which invests in renewable energy projects and helps local people to reduce their use of energy and save money. As a co-op, they’re able to raise money to fund projects by inviting people to become members of the co-op by investing in shares in Community Energy Warwickshire. They’ve used this approach to fund the solar powered hospitals project which has put 60 kWp of solar panels on roofs at Stratford upon Avon and Warwick Hospitals.
The Rural Community Energy Fund is being administered by WRAP on behalf of DECC and aims to help rural communities in England to access funding for professional consultancy input to feasibility studies and other pre-approval expenditure for renewable energy projects. A total of £15 million is available, with no time limit on applications. http://www.wrap.org.uk/content/rural-community-energy-fund

Energy From Waste in Chipping Campden
Transition Shipston is arranging a visit to the Northwick Biogas plant near Chipping Campden. The plant derives methane gas from farm waste (such as animal slurry) and from waste food. A generator then converts the methane into “green” electricity. If you are interested in seeing how this is done come along on the visit. Contact: Dave Passingham davepassingham@hotmail.com 01608 661816

Free Compost Bins
Warwickshire County Council are keen to promote home composting.  It is a great way for gardeners to make their own compost and it diverts garden and food waste from the waste stream, saving Council tax money. To encourage residents of Warwickshire to either start composting or help existing home composters improve their knowledge, the County Council's waste management team are running a series of free home composting workshops across Warwickshire.  Each resident attending the workshop will receive a free 330 litre compost bin. (Limited to one free bin per household). Each workshop will last approximately 45 minutes consisting of a 30 minute presentation by two County Council officers with an expertise in home composting and waste management plus a question and answer session.  The workshops for the Stratford area is on Thursday 10th April
Holy Trinity Church Centre, Old Town, Stratford-upon-Avon 6.00pm - 6.45pm
We would be grateful if you could spread the word about the workshops to the residents in your Parish area.  To book on to a course either:
If you would like a poster to help advertise the workshops in your parish please let me know. If you have any queries about the workshops please let me know using the contact details below.
Katey Stoneman
Waste Projects Officer
Waste Management
Warwickshire County Council
01926 412724
kateystoneman@warwickshire.gov.uk

Bring & Share Again
The next gathering of Heart of England Transition groups will be a bring & share meal at 7.00 on Friday 31st January at Lifeways in Stratford. Transition supporters from Stratford, Snitterfield, Chipping Campden and Ilmington, Leamington and other places in Warwickshire are due to attend. There will be a discussion after the meal about how to implement street and village projects such as http://www.transitiontogether.org.uk/totnes-streets/.