Anna Pike of the Ilmington Solar School Project has asked transition Shipston to forward this appeal:


Ilmington School's solar project aims to raise £17,000 to put solar panels on the roof. Becoming a ‘Solar School’ is an exciting prospect for Ilmington School. We are the only school in Warwickshire to have been selected to participate in the carbon-cutting organisation 10:10's Solar School project (www.solarschools.org.uk). They are supporting us in our bid to raise the money to make our school 'Solar'.


The project has many educational, environmental and financial benefits. Today’s primary school children will be the generation for which climate change, global warming and scarcity of fossil fuels will have the greatest impact. Solar panels will reduce the school’s carbon footprint and allow the children to learn about sustainable and renewable energy supplies first hand. Solar panels will also allow teachers to deliver national curriculum subjects such as numeracy, IT and science in different, fun and exciting ways using data the children can gather from the panels themselves.


By generating our own solar electricity the school can also reduce its energy bills (electricity and oil) by up to £2000 a year. Energy bills are paid directly out of the school's annual budget and for a small school like ours this represents a significant amount that could be put to direct educational use. The benefits of this will be felt by the community for many years to come.
The children are busy taking part in sponsored runs, bike rides, swims, gymnastics, cake bakes and ice cream sales. We are, however, a small, rural school comprising about 70 families (108 children) and need to reach out to the wider community for financial support. I would be grateful if you could forward this appeal to individuals and businesses associated with Transition Shipston with an invitation for them to be part of this amazing project.


There are several ways in which individuals and businesses can help us achieve our goal. Donations can be made directly via our dedicated online fundraising website www.solarschools.org.uk/ilmington and are tax deductible (charity number: 1028139). Donations of £100 or more will allow a company to place a logo and website link on our fundraising site. We can also celebrate business support through our parent newsletter and dedicated social media sites. In addition we will be collating a special ‘book of sponsors’ at the school to celebrate the support shown by the community. Major donors (£2000 or above) will have their names included on a celebratory plaque.


Businesses can also show support by displaying a poster for our appeal. Offers of this can be emailed to me directly at a.v.l.pike@googlemail.com. Supporters can also follow our fundraising story on twitter (twitter.com/ilmingtonsolar) and facebook (www.facebook.com/ilmingtonsolar).


Thank you for your continued support 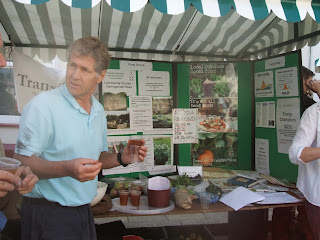 Transition Shipston Stall
Shipston's first food festival last month was a great success with about 2000 attending. The High Street was heaving with colourful stalls over the weekend. There were more than 30 stalls selling produce from the Stour Valley and the north Cotswolds. Visitors enjoyed artisan food stalls and local beers along with cookery demonstrations from Francis Green, the Cotswold Traiteur, as well as live music. It was good to see that local producers were able to put on displays at least as good as the Italian and French Markets.
Apple pressing.. 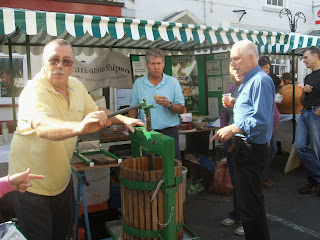 There was lots of interest in Transition Shipston's apple pressing stall at the Food Festival. Visitors were offered a taste of the of the apple juice. Many people who had not tasted fresh juice before seemed surprised at how fresh and tasty it was. The apples had been collected from the orchard at Ilmington Manor which would otherwise have been wasted. There were others offers of donations of apples to press and share the juice which we are trying to process.
If you have unused apples that you would like to share or if you would like to help with apple pressing contact Dave Passingham 07973 846605.
If you live nearer Chipping Campden...
Susie Tombs from Transition Campden writes:
At this time of year, if you have an apple tree you might be feeling overwhelmed by the harvest. If you wish to take any excess fruit to the school garden ( that's the 'big' school, in Cider Mill Lane), they can be processed into juice.
Drop off your (reasonably sound) fruit - not old windfalls - in carrier bags or boxes by the shed in the school garden, which is next to the caretaker's house, to the left as you go into the school drive. Leave a note to say how much in weight you have left approximately and how many bottles of juice you would like. Cost is expected to be £1.40 per bottle, for pressing and bottling, and it will take about 2-3lbs of fruit per bottle. Anything left over will be sold to raise money for the school. Drop off within the next 7 days.
The teacher in charge of this is Geoff Carr - who you may have seen on River Cottage, showing how the orchard is used by the school for its Land Based Sciences course.
"and I am autumn-tired /of the great harvest I myself desired" Robert Frost
Permaculture (& Organic Gardening) Group
When starting, Transition groups are encouraged to go on a permaculture course in order to understand environmental design for organic gardening, self-maintained agriculture and sustainable architecture... http://en.wikipedia.org/wiki/Permaculture. Those who attended permaculture courses in Whichford about 4 years ago have been doing their own thing since then. Now we are going to get together every month to discuss our experiences and exchange tricks and tips. If you are interested in organic gardening in general or permaculture ideas in particular why not come along for a pub chat on Tuesday 19th November at the Red Lion in Long Compton. Contact Dave Passingham davepassingham@hotmail.com
Heart of England Transitioning
Heart of England Transitioning is a network of Transition groups and village groups from around Warwickshire. At the bring & share meal and gathering on 25th October at Lifeways in Stratford there were 10 groups represented. After the meal we heard all the latest news from around the county. It's always inspiring to hear about the latest activities which include harvest shares, community gardens, community fund raising, “incredible edible” public flower gardens, bee keeping and protests meetings about fracking.
The network decided to organise a big speaker meeting and invite one of the founders of the Transition movement Rob Hopkins. It was decided to organise some community based environmental training such as Transition Streets (& village) groups http://www.transitiontogether.org.uk/totnes-streets/.

Transition Shipston Xmas Fayre
Transition Shipston is this year organising an Xmas Fayre at theTownsend Hall on Saturday 7th December. Ideas for baking on the day include: ginger bread biscuits and bread wreaths. There will also be real Xmas wreaths making and other crafts. We hope to have small indoor market including stalls of nuts, turkeys, apple juice & cider, fruit wine etc. Calypso Kids play group will be organising games for children. For more information contact Erry Lilley erry@redwax.co.uk

Fracking – The Wrong Move!
Fracking may come to Warwickshire – this article was sent to us by John Stott of the Making Henley Greener group in Henley-in-Arden:

Right now, the government has earmarked nearly two-thirds of England for possible fracking, without fully understanding what effects it is likely to have on our health or the countryside.
What we do know is that if we want to tackle climate change, we must not be be extracting more fossil fuels out of the ground [1]. The International Energy Agency has repeated its warning that if emissions are to be held within the projected danger threshold of a 2C rise, two-thirds of known fossil fuel reserves cannot be burned. So what’s the point of spending money seaching for more fossil fuels? – There isn’t any. It’s pointless and a waste of money. Money should be spent on development and creating clean sources of energy instead.
Fracking involves horizontal drilling that can extend two miles from the actual drill site, passing directly under the homes of those nearby. Despite the government’s enthusiastic dash for gas, we have the power to make fracking very difficult, and may even be able to halt exploration in its tracks, if enough of us come together. This is how it works: if you don’t want fracking companies drilling under your home, you can say so. Then, any drilling there becomes trespassing; the frackers would be breaking the law. All you have to do is declare that your home is 'Not for Shale' and you will be added to the growing legal block to stop fracking where you live. But action is needed quickly, as there are hints that the government will try to change the law to support their dash for gas. [2]
To find out if your land is scheduled as possible fracking territory and to object if necessary click here http://www.wrongmove.org/