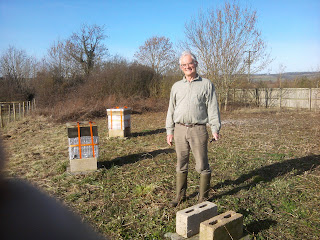 A new apiary has been moved to its home near Shipston. Three beehives were purchased last year by Shipston Beekeepers with the support of Transition Shipston with a grant from the Council. The hives are to form an apiary which is to be used for demonstration purposes for new beekeepers. The hives were populated with colonies of bees last year by Douglas Nethercleft (pictured) and kept at Oxhill. The Beehives and Douglas at Rowborough Having survived (so far!) a really harsh winter, all three colonies have been flying in the recent unseasonably warm weather, so it was decided that now was the time to move them to heir permanent home at Rowborough Farm (between Shipston and Stretton). So earlier this month ten members of Transition Shipston and/or Shipston Beekeepers -plus three children and two dogs - attended a work party at the Apiary. Invading undergrowth was cut back, grass was mown and everyone enjoyed the bonfire! Then, with the brief cold snap earlier in the week we were able to carry out the move from Oxhill
to Rowborough. the hive entrances were sealed with tape in case any bees escaped into Douglas‟s Land Rover during the journey. By the time we got the hives to their new home the sun was shining brightly and the temperature was high enough for a few bees to emerge and investigate the new environment. Everything looks set for an interesting and hopefully sting- free year with a good harvest of honey! Anyone interested in learning more about beekeeping or helping with the apiary can contact Douglas on: djn0001@aol.com
07850 352905
Posted by TransitionShipston